I want to tell the stories behind some of my publications: why the work was done, who funded it, the roles of team members, or stumbling across unexpected results.

In this post, I’ll tell the story of the team effort behind our latest paper in the journal ACS Applied Bio Materials.

END_OF_DOCUMENT_TOKEN_TO_BE_REPLACED

I’d like to highlight the great work from PhD student Javad Naderi.

The first, published in the Journal of Antimicrobial Chemotherapy, is on covalent coupling of two members of the echinocandin antifungal drug glass to surfaces. Both anidulafungin and micafungin surface coatings were highly antifungal vs Candida albicans.

However, perhaps the most important finding was that the anidulafungin surface killed yeast and prevented biofilm, and could be washed and rechallenged at least 5 times without losing efficacy.

This finding supports a mechanism of action where the drug is:

Along with previous publications on the other approved echinocandin, caspofungin, there is more evidence to suggest that the echinocandin drug class can be antifungal even when immobilised on surfaces (i.e. does not need diffusion to reach drug targets). Exactly how this happens is an active area or research for us.

The second explores the surface activity of another drug class, the polyenes. At first, it looks like drugs like amphotericin B remain active when attached to surfaces; however, if you are careful and you make sure to wash off ALL traces of loosely adsorbed compounds (leaving only contently attached) then this effect is eliminated.

Failure to account for compounds that can be washed off and possible misinterpretation of mechanism of action should be an issue that researchers are made aware of.

This article was a Featured Article and a Scilight published in the journal Biointerphases.

Recently, Dr Sarah Kidd and I participated in the Fungus Olympics. This event is an international competition between laboratories to see how fungal strains use hyphae to navigate microscopic obstacles.

I wanted to share here my experience and fun I had participating in this event. Also, the event was important because we are able to learn much about how fungi sense surfaces: an important aspect of the way in which they cause diseases.

This has developed into an interesting story and I pitched the idea to The Conversation. I have been working on the article a great team there and the piece is nearing completion. Hopefully it will be soon when I can share the published final version.

Until then, I will tease a video from the event which is the first video that I’ve uploaded to YouTube. It shows one of our “athletes” navigating some of the microfluidic obstacles which make up the “events” in the competition.

Earlier this year, UniSA produced a video on our Research Themes Investment Scheme project. In this project we describe new materials that release antimicrobial compounds on demand.

Thomas, Hans, Pratiti and I had a lot of fun making this video. Here are some of behind the scenes photos from the production. 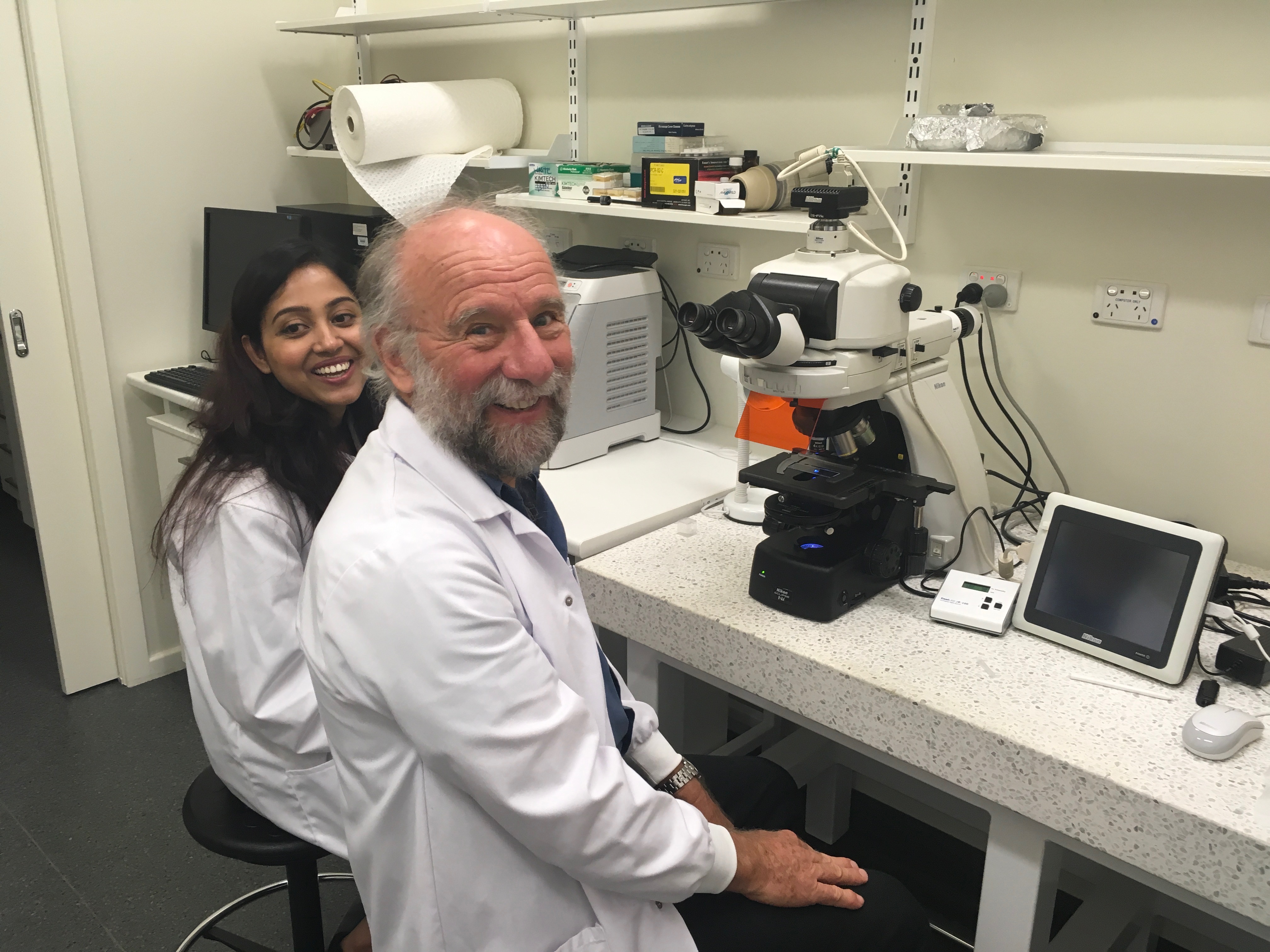 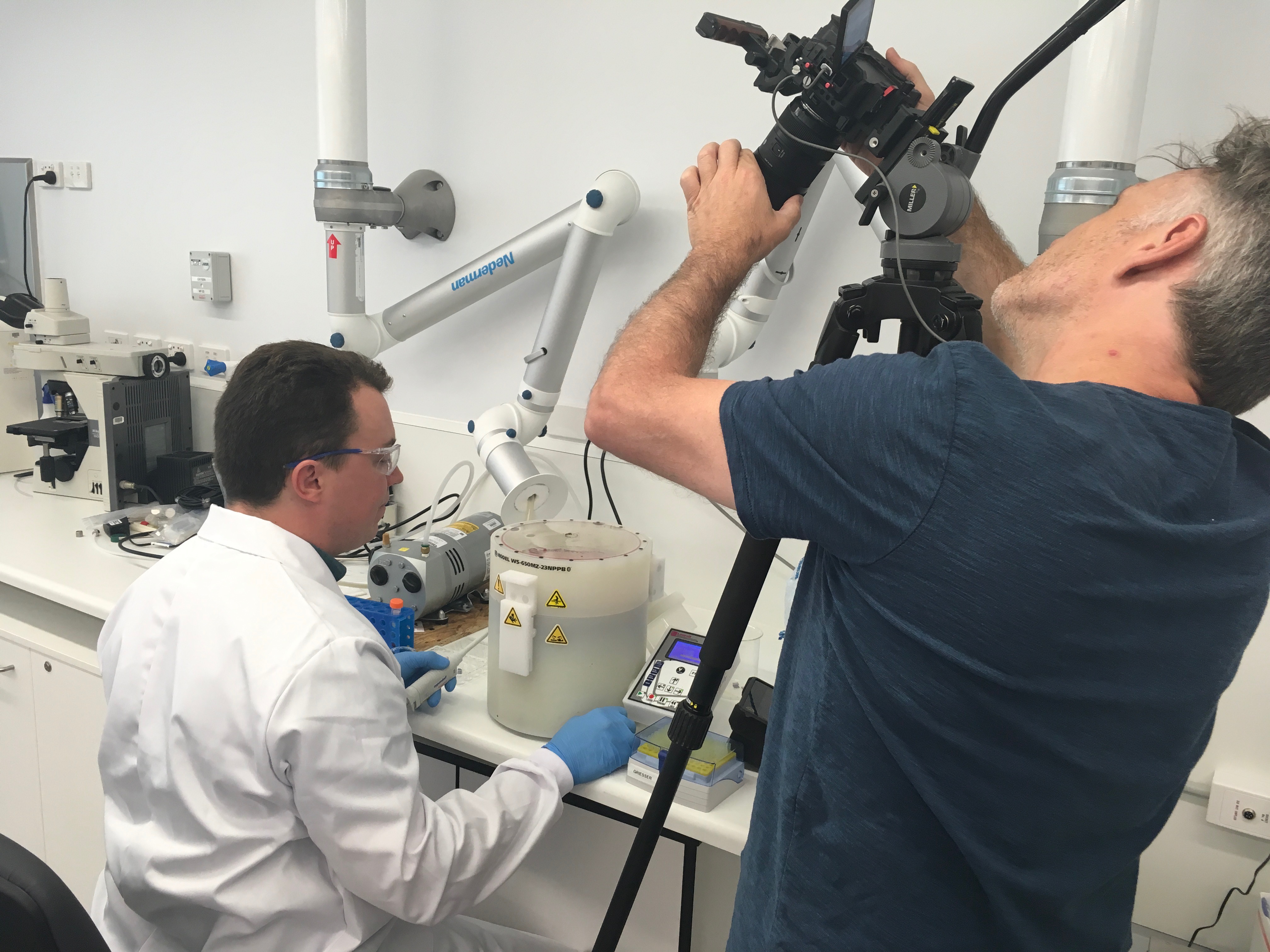 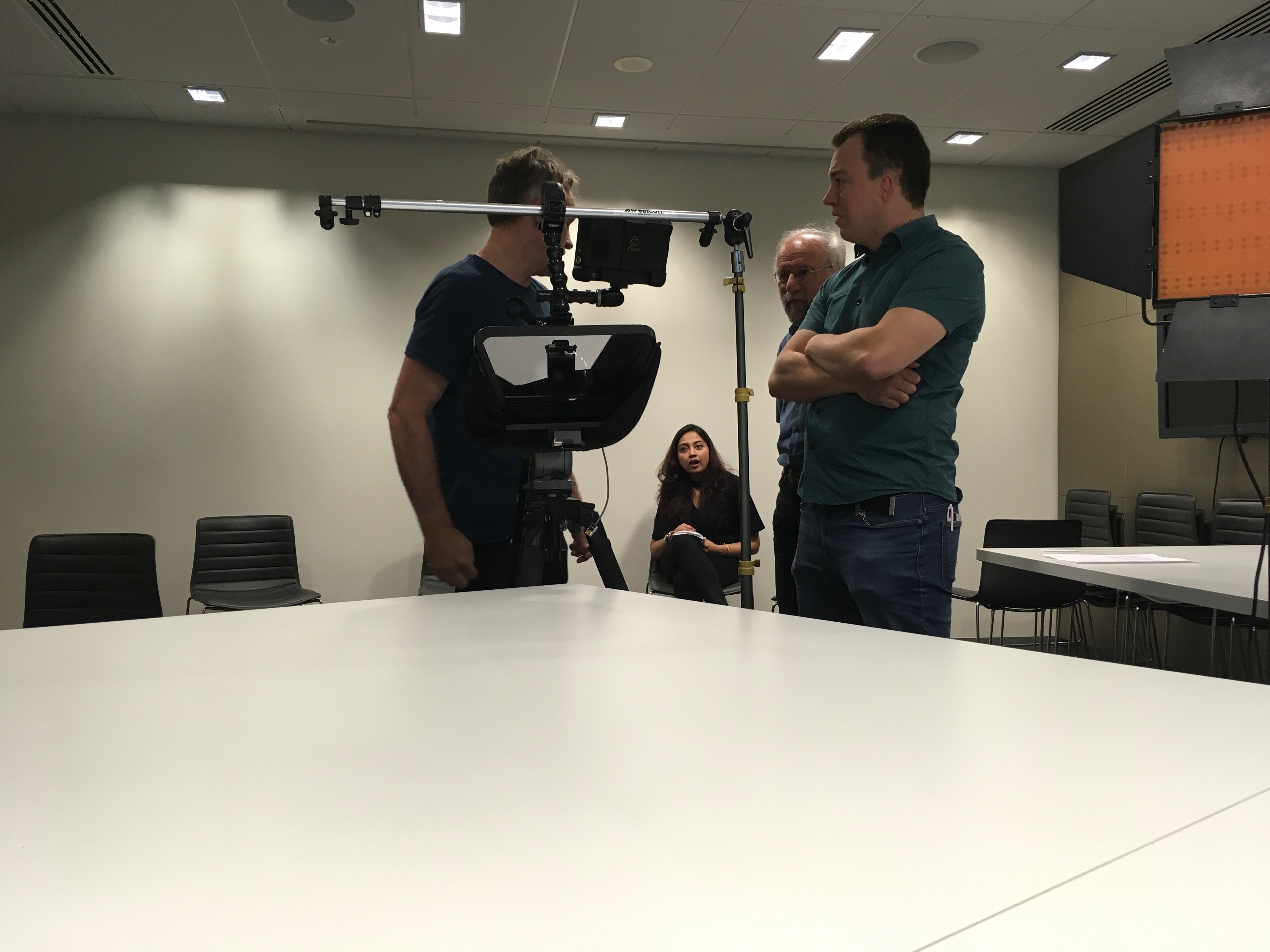 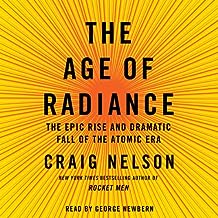 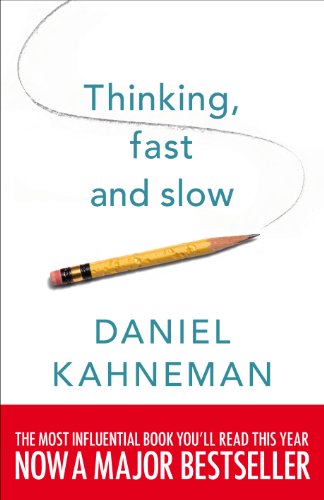 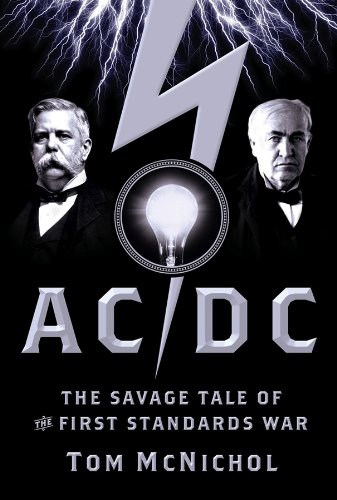 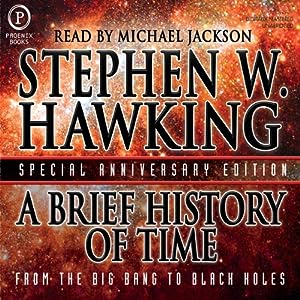 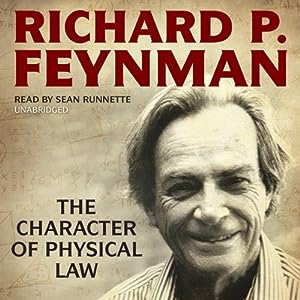 How can we improve medical implants so that they combat microbial colonization and reduce the problem of implant-associated infections?

Basic science approaches for the design antimicrobial surfaces and coatings has been reviewed but it is clear that attention for fungal pathogens has been missing.

Fungal pathogens are important because they

We have published a new review entitled The Importance of Fungal Pathogens and Antifungal Coatings in Medical Device Infections.

This review is a significant addition to our 2014 review Biomaterials surfaces capable of resisting fungal attachment and biofilm formation. Biotech Adv. 2014; 32: 296-307.

This was a massive team effort that progressed over the course of one year. Our team of five authors wrote 17 pages of printed text and reviewed 89 references. This is the most comprehensive and up-to-date review in the field. We hope that the discussion on materials design will become an invaluable resource for researchers and feed into broader thinking about the wider field of design of antimicrobial biomaterials and polymicrobial biofilms. 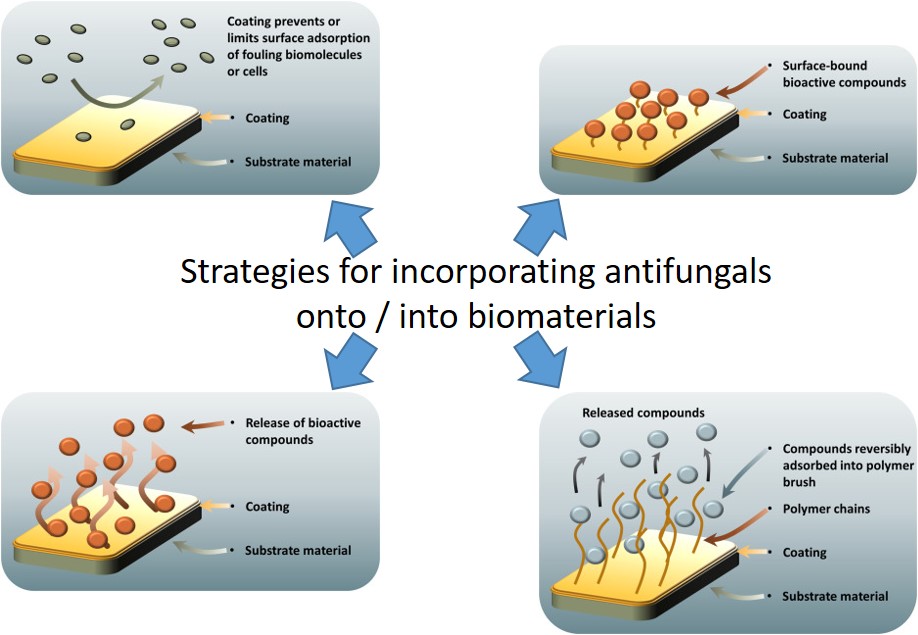 Materials strategies for incorporating antifungals onto and into biomaterials.

The following video shows a time-lapse video of Blumeria graminis f.sp. hordei germination on an artificial surface coating conducted by Dr Bryan Coad and Dr Alan Little, University of Adelaide. The coating was made from hexacosanal (C26 aldehyde) mixed with Formvar ® resin and then cast onto glass slides using the previously published method (1).

Live cell imaging was conducted over 6 hours and compressed into a 5 second video. This video will automatically restart and loop.

In the first hour, primary germ tubes are extended and conidia “tilt” and roll slightly. A small proportion of the conidia develop appressorial germ tubes that extend away from the body. Some of these differentiate into hooked appresoria and attempt penetration of the surface coating. After 6 hours, low humidity in the chamber caused the conidia to desiccate.

This video is used to exemplify the method of live-cell imaging and visualisation of germination on artificial coatings. This technique can be used to visualise germination on other cuticle-mimetic surfaces (such as plasma cuticle mimics).

Using this method, we hope to understand (through visulisation) how fungal germ tubes are developed in response to surface chemistry and topography. Understanding the physicochemical features of surfaces will aid in the discovery of new agents to protect crops from diseases.

We have continued our investigation on coatings that could be used to combat deadly fungal infections. Implanted medical devices can become colonised by the fungal yeast Candida albicans despite sterilisation procedures. Therefore, a medical device with a surface modification that could kill Candida on contact may help to reduce infection and death from these infections.

Previously we have shown that the antifungal drug caspofungin can be attached to medical-grade plastics using an ultra-thin surface layer only 20 nm thick. Because this coating is thin and flat, the caspofungin molecules essentially form a flat layer (approximately a 2 dimensional surface).

Our latest research has investigated the possibility of instead attaching caspofungin on polymer brushes. This allows the drug to be presented on flexible polymer linkers, extending hundreds of nanometres from the surface, and would improve the way the drug interacts with the fungal cell wall. 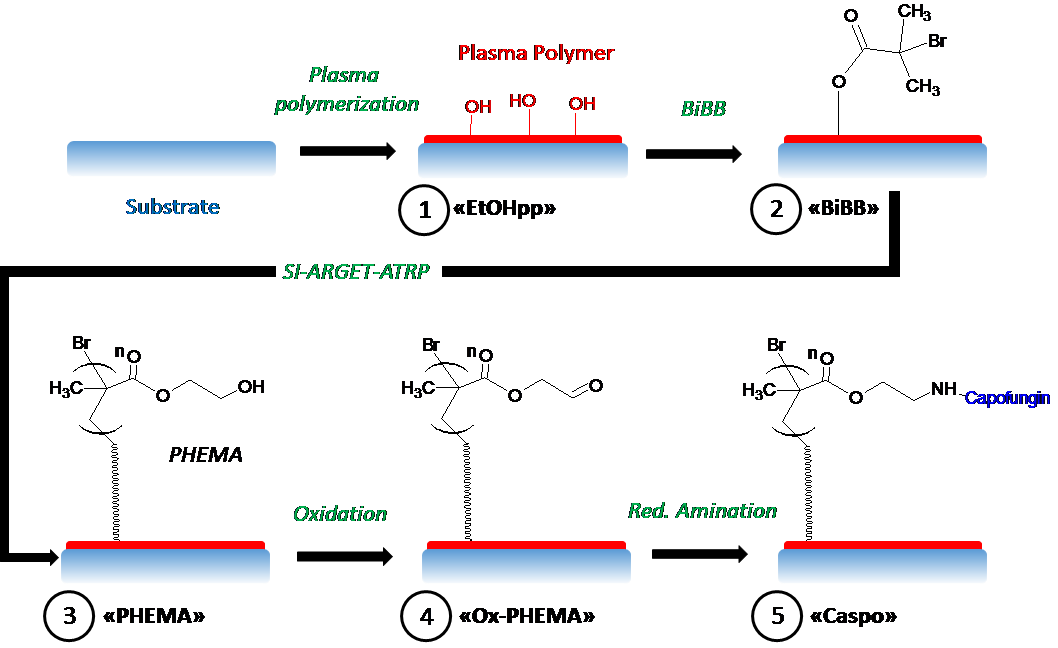 Depiction of the reaction steps, combining plasma polymerization and ARGET-ATRP to covalently attach amine-containing drugs, such as caspofungin, to surface-grafted PHEMA.

This is an important advancement in helping us to understand how surface-immobilised drugs interact with the fungal cell wall. We will use this information to understand how antibiotics work mecahanistically – that is, how tethered drugs would be able to penetrate into the cell wall and find their target of action which ends up killing the cell. Finding new mechanisms of action for antibiotic drugs could be one way that we can find new uses for a dwindling supply of effective antibiotic agents.

The work has been published in the journal Biointerphases and is an “Editor’s Pick”. This article is freely accessible through open access publishing.

The Australasian Society for Biomaterials and Tissue Engineering Conference (ASBTE) was held in Canberra from 18th to 20th April, 2017.

The conference venue was ANU commons. It was perfect autumn weather. 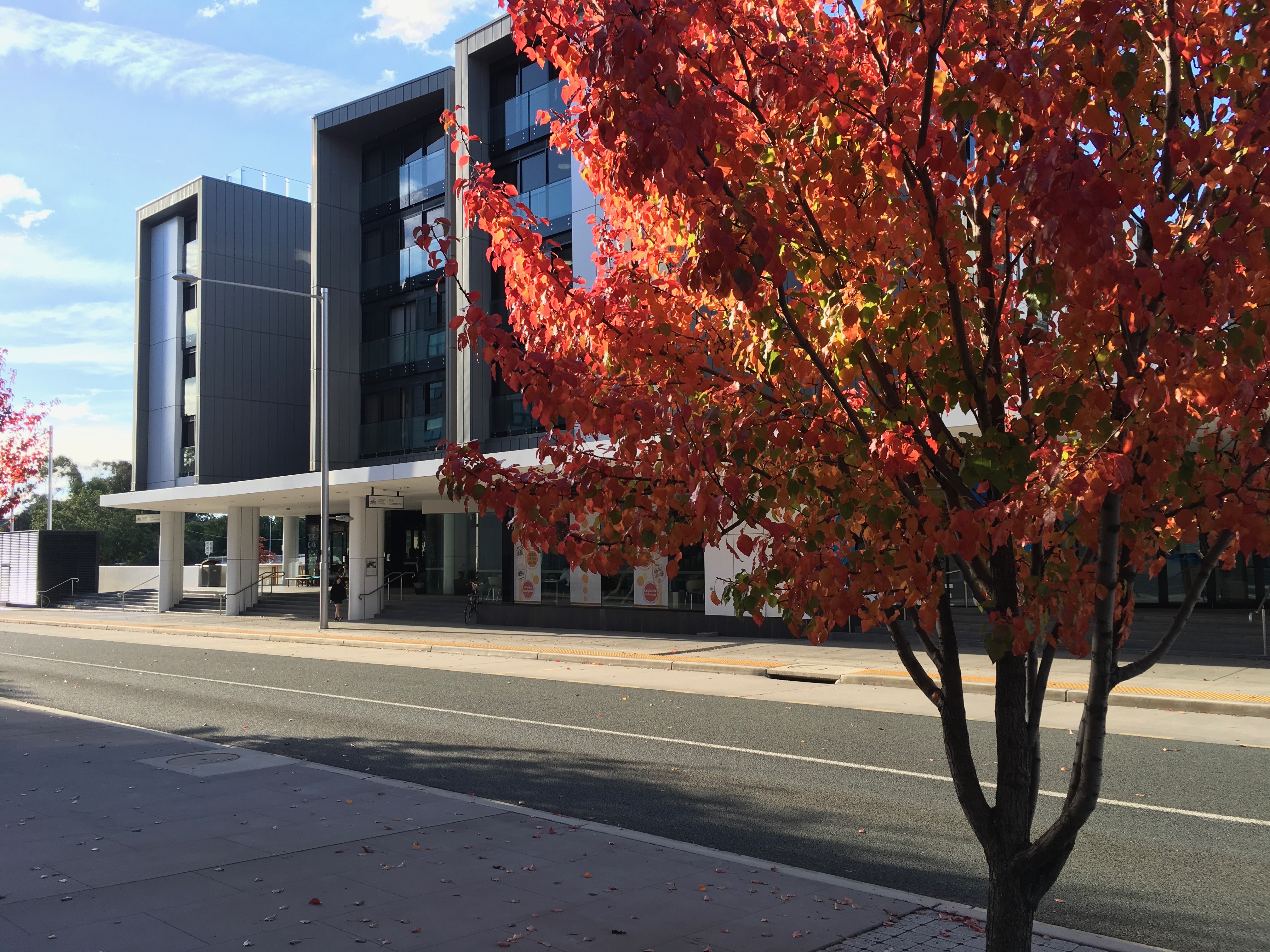 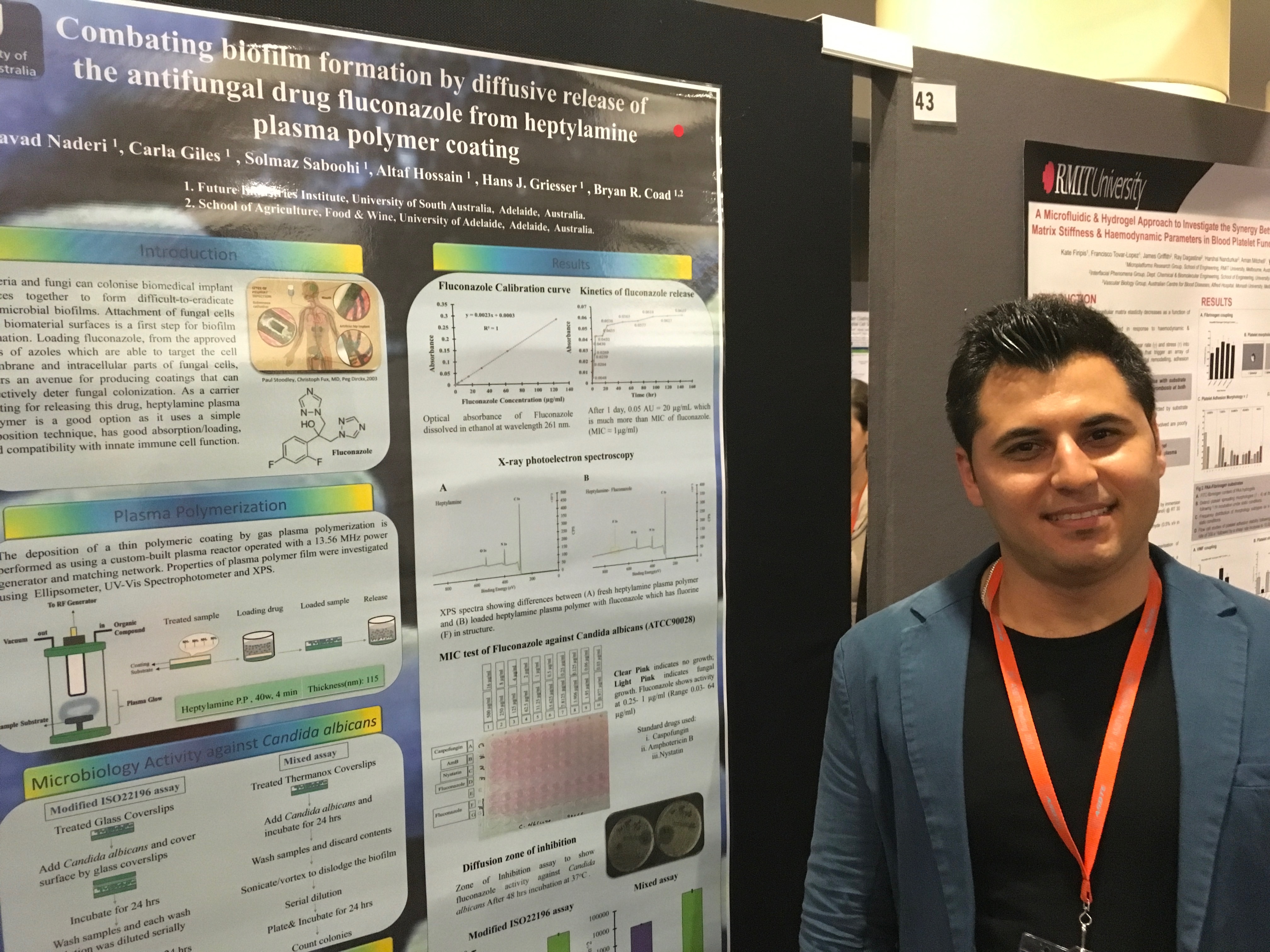 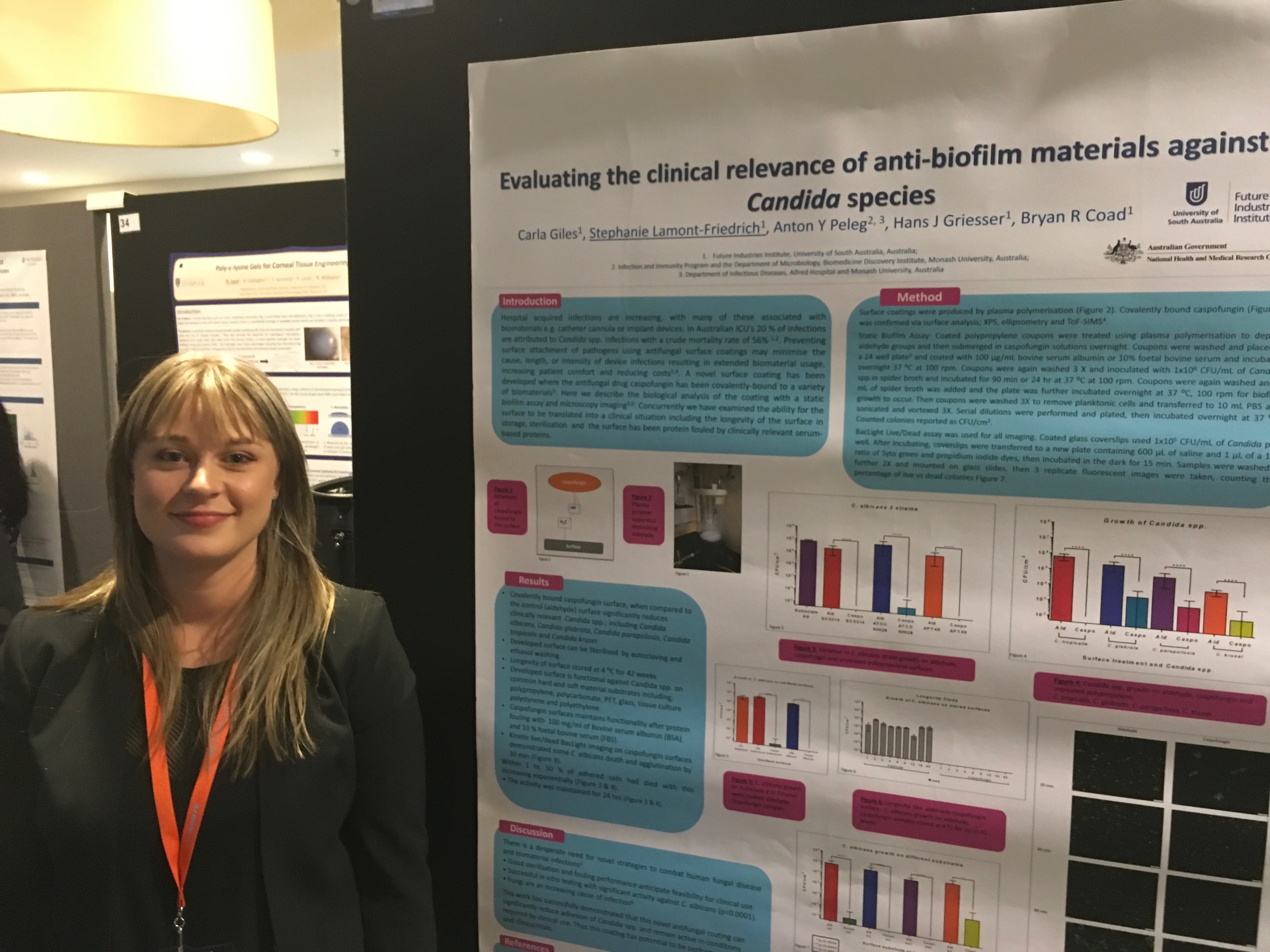 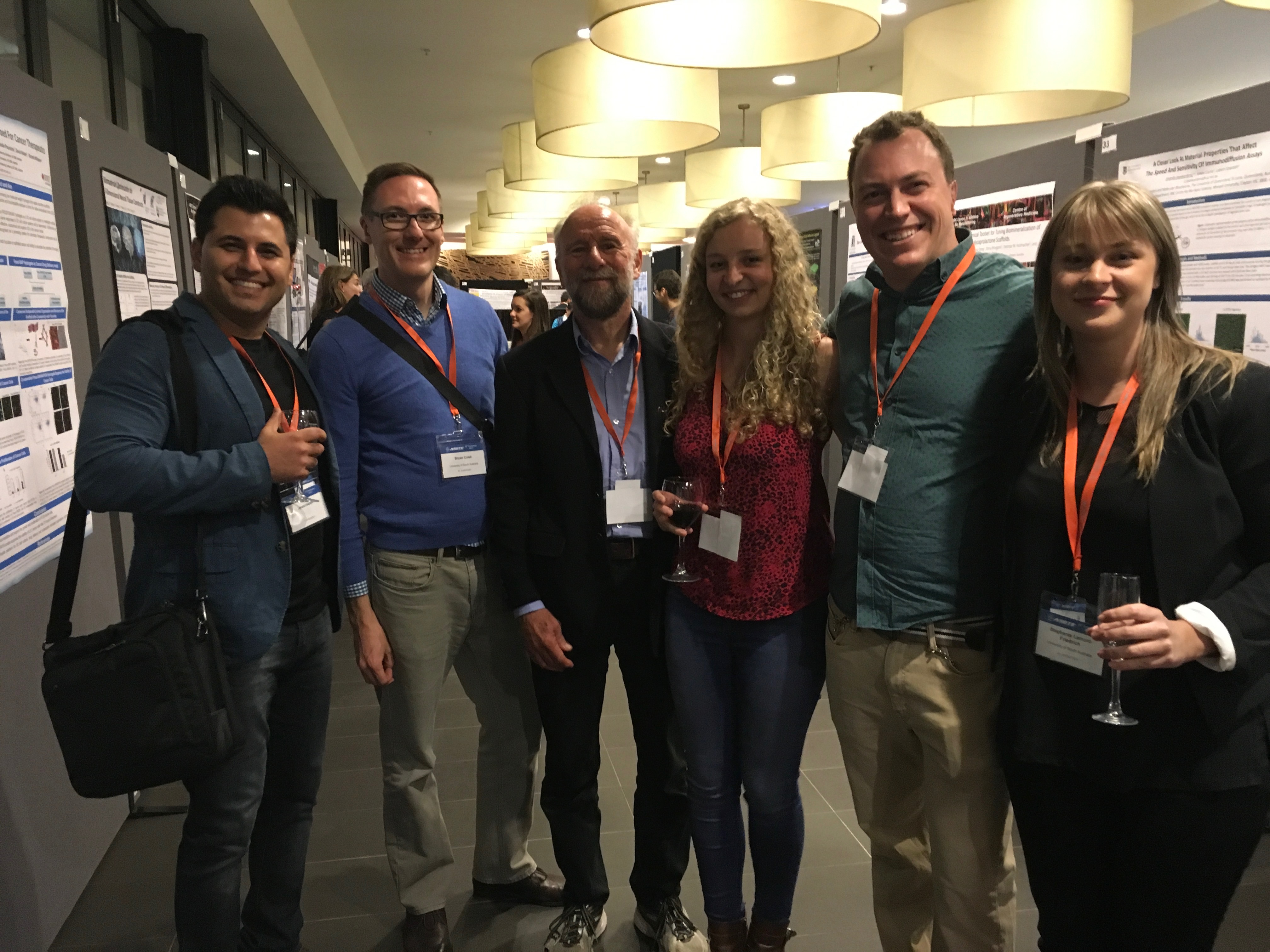 The conference dinner was filled with wonderful food, and a 25th anniversary slide show for past ASBTE conferences. 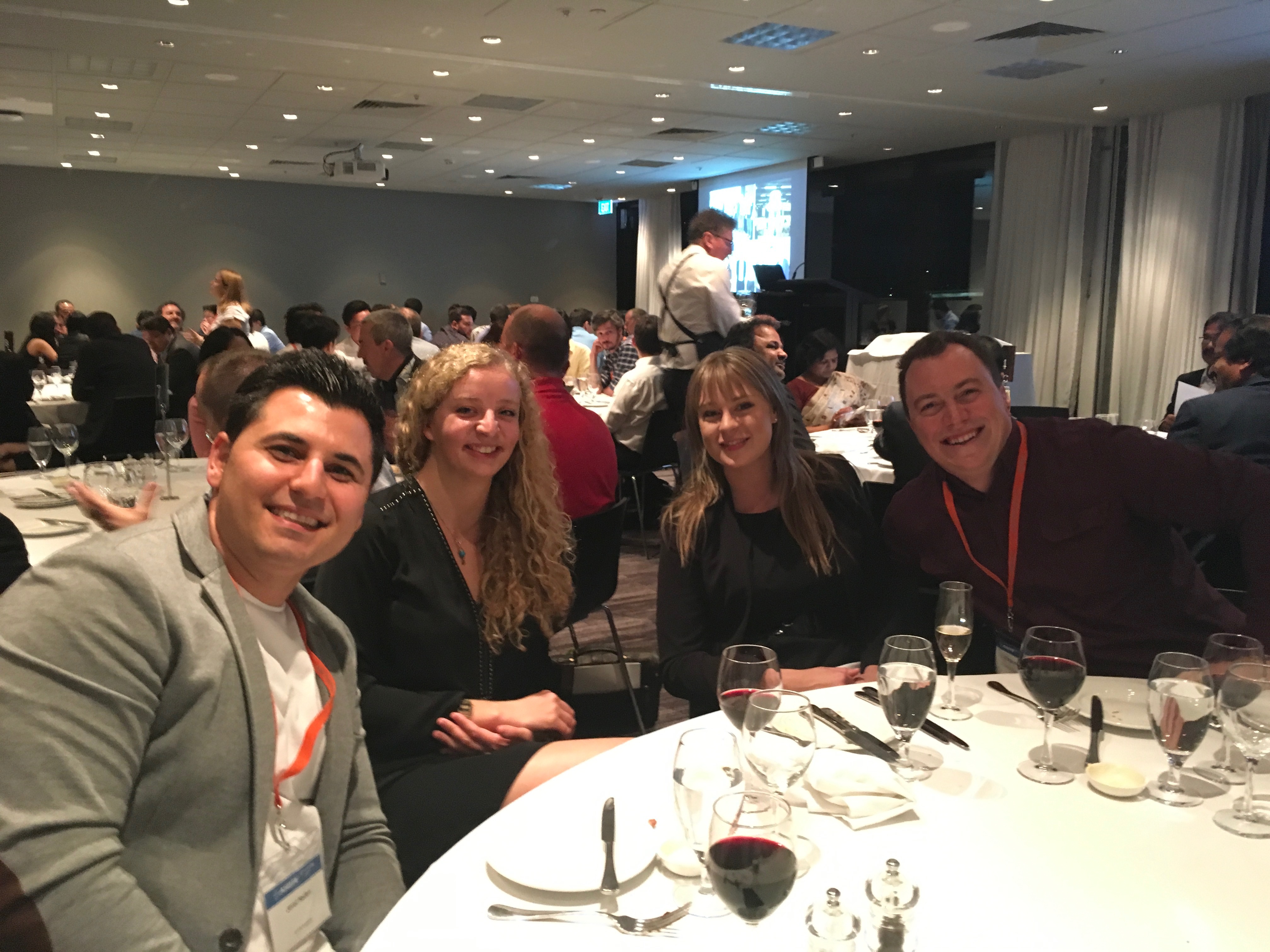 Hans was able to receive his Award of Excellence (officially awarded last year at the World Biomaterials Congress) and gave a moving speech about his years of research and its impact.

The conference was well attended right up to the last session. 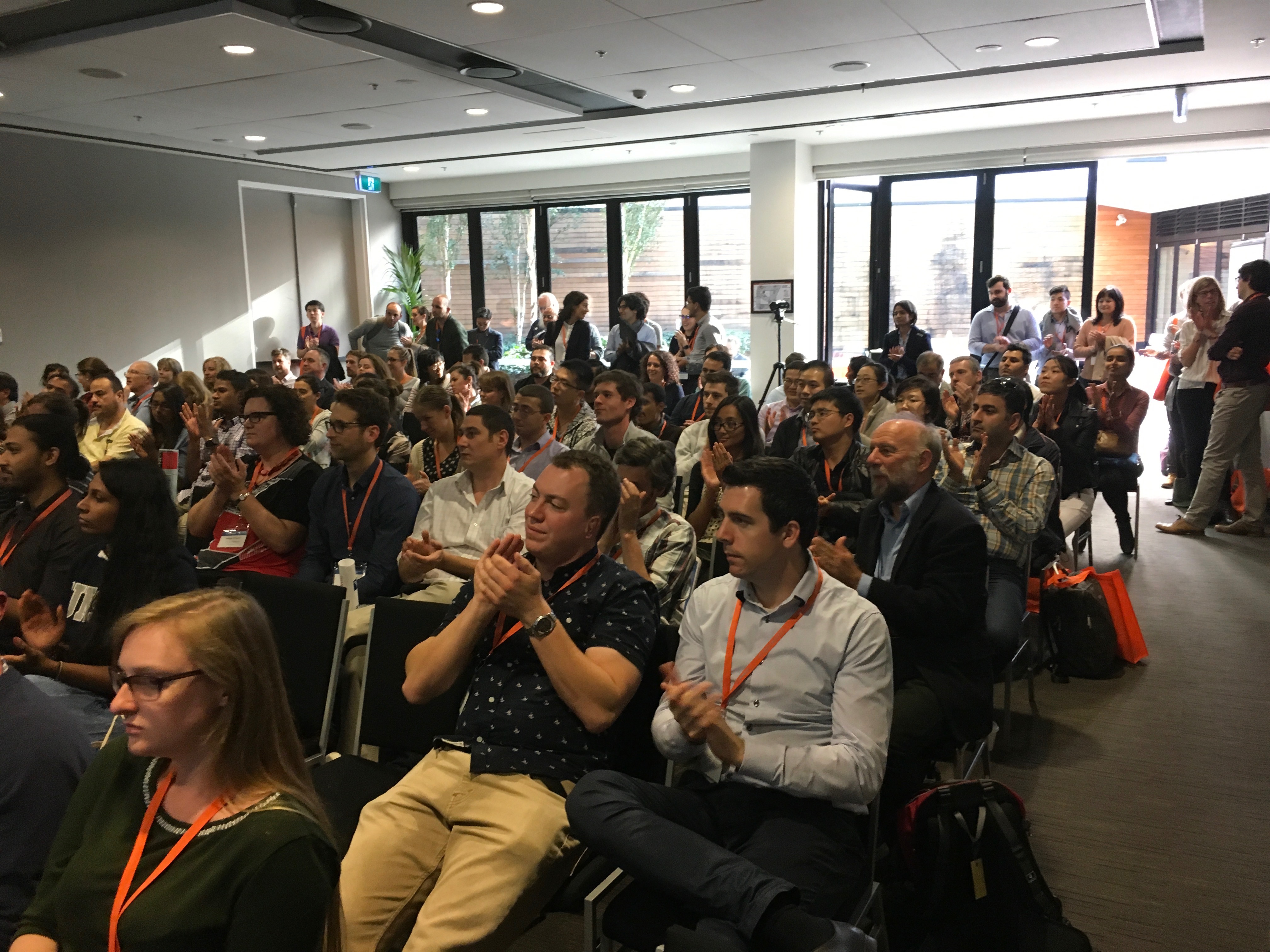 This website was migrated to a different provider which resulted in some down-time.

We’re back up and running now. Just a few broken links to fix and then on to providing new content.